Fishing program gives veterans a day on the ocean 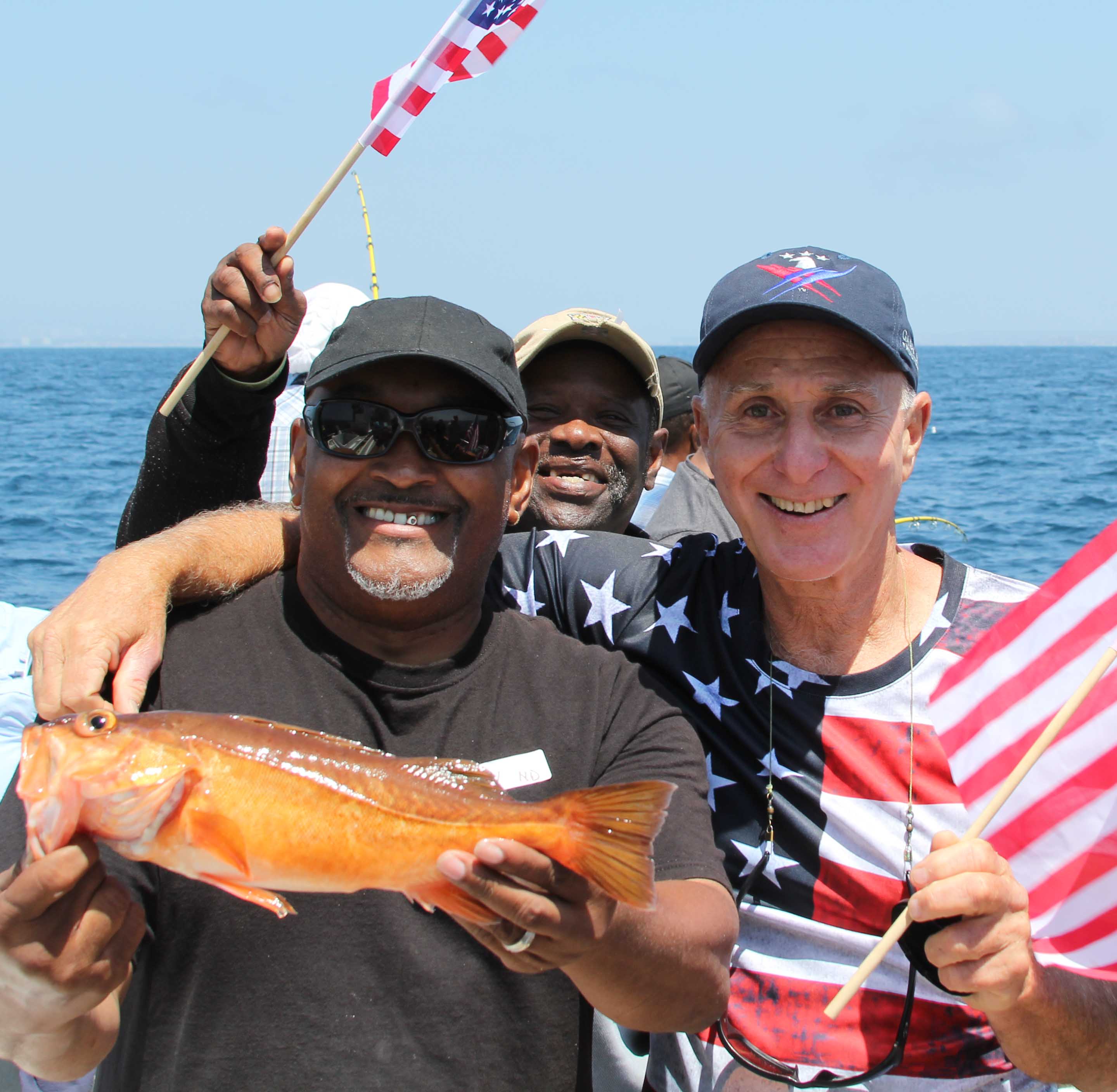 Larry Brown described himself as an “old retired guy,” but sounded more like a military recruiter as he addressed nearly 30 veterans on the stern of the sportfishing vessel Betty O, moored at Dock 52 in Marina Del Rey, California, in August.

“So what I’m going to try and do is enlist you to be a soldier again, protecting our environment,” Brown told the captivated audience. “You’ve already been soldiers, and when you think about the environment, it needs protecting just like our country does.”

Larry sponsors a veterans fishing program also supported by the Los Angeles Rod and Reel Club, Marina Del Rey Anglers, and the California Coastal Conservancy. The program gives veterans struggling with personal challenges a day of recreation on the ocean and an opportunity to learn about marine stewardship. To enhance the program, NOAA Fisheries is designing a sea stewardship handbook that describes pressing issues facing our ocean—such as marine debris, polluted runoff, and ocean acidification—and explains how individuals can make a difference.

The California State Coastal Conservancy partially funds the program to help fulfill its mission of increasing public access to coastal resources and educating the public about them.

“The Coastal Conservancy provides funding for the veterans’ program through the Explore the Coast Program,” said Evyan Sloane, a project manager for the Coastal Conservancy. “The program really focuses on public access by providing grants to non-profits, schools, and local government to get their communities out to the coast and educate the community about their coastal resources.”

Larry’s pitch on the environment met with endorsements of “Hooah!” when ethical angling and protecting marine mammals from marine pollution came up. Whether on the water for the first time or seasoned boaters, the veterans were excited and ready to learn more.

Sponsors offer the trips in partnership with the Los Angeles Veterans Administration Hospital and the CalVet Veterans Home program. According to Brown, doctors and recreational therapists say the fishing program is one of most popular recreational opportunities for veterans in Southern California.

Zach Schakner, NOAA Fisheries’ West Coast Recreational Fisheries Coordinator, also noted that the program meets an objective in NOAA Fisheries’ Recreational Fishing Implementation Plan. The plan calls for promoting fishing opportunities for children, veterans, disabled anglers, and others who otherwise may never experience the fun of getting on the water and catching a fish.

“This program and those like it not only provide participants direct and enriching opportunities with nature, but they also greatly increase awareness of important marine stewardship and ethical fishing practices,” Schakner said.

Several veterans, including Eugene Rivera, have enjoyed repeat fishing excursions. Rivera has his nickname, “Buddha,” tattooed on his arm just below “U.S. Army.”

Phil Bell, also known as “Fisherman Phil,” coordinates the trips for Marina Del Rey Anglers. He darts around the boat – fixing tangled lines and snags, attaching bait, and talking to the veterans.

“The veterans love it and you can see they’re having a great time,” Bell said. “One guy just got back from Iraq about a year ago, came off the boat, came up to me and said, ‘Phil, this is the nicest thing anyone has ever done for me since I’ve gotten home from Iraq.’ That was really great to hear.”

After a full day of fishing, the Betty O returned to its slip in Marina del Rey, its passengers tired but full of stories and appreciation for the ocean.

“What we find is just being with them, spending the day with them, and treating them to a day on the water is the best way to say thanks,” said Brown. “It doesn’t have to come out of our mouth, they just know it, feel it, and appreciate it.”